This coming Tuesday, 16th January 2018, we’re holding the London launch event for The Shadow Booth: Vol. 1, in partnership with Unsung Live! The event is FREE, but please RSVP using the link at the bottom of this post if you’d like to come along.

The evening will feature readings by RICHARD V. HIRST and GARY BUDDEN, both featured in Volume 1. There will also be readings by Unsung guests JAMES MILLER and STEPHEN ORAM – so prepare yourself for an evening of speculative readings, heated discussion, and the weird and wonderful. The event starts at 7pm on Tuesday 16th, and runs until about 9.30pm. It takes place at The Star of Kings, 126 York Way, London (near King’s Cross).

Reading this evening, we have:

JAMES MILLER: James Miller is the author of the novels LOST BOYS (Little, Brown 2008) SUNSHINE STATE (Little, Brown 2010) and most recently UNAMERICAN ACTIVITIES (Dodo Ink 2017) as well as numerous short stories and articles. He is senior lecturer in Creative Writing at Kingston University where he runs the MA in creative writing.

GARY BUDDEN: Gary Budden writes fiction and creative non-fiction about the intersections of British sub-culture, landscape, psychogeography, hidden history, nature, horror, weird fiction and more. A lot of it falls under the banner ‘landscape punk’. His work has appeared in The Shadow Booth: Vol. 1, Black Static, Unthology, Year’s Best Weird Fiction, The Lonely Crowd, Litro, Structo, The Quietus and many more. He was shortlisted for the 2015 London Short Story Award, and his story ‘Greenteeth’ was nominated for a 2017 British Fantasy Award and adapted into a short film by the filmmaker Adam Scovell. He also co-runs the indie publisher Influx Press. His debut fiction collection, HOLLOW SHORES, was published by Dead Ink Books in October 2017. He might also be part of the Eden Book Society.

RICHARD V. HIRST: Richard V. Hirst is from Manchester. His writing has appeared in The Shadow Booth: Vol. 1, The Guardian, The Big Issue and Time Out. His latest book is THE NIGHT VISITORS, an award-winning ghost story co-written with Jenn Ashworth and told entirely via emails.

STEPHEN ORAM: Stephen Oram writes science fiction and is lead curator for near-future fiction at Virtual Futures. Currently, he’s the cultural partner in a collaborative project with scientists at King’s College, London – they do the science he does the fiction. He’s been a hippie-punk, religious-squatter and an anarchist-bureaucrat; he thrives on contradictions. He is published in several anthologies, has two published novels, QUANTUM CONFESSIONS and FLUENCE. His recent collection of sci-fi shorts, EATING ROBOTS and Other Stories, was described by the Morning Star as one of the top radical works of fiction in 2017.

All are welcome, so please come along for an evening of free speculative fiction and good company!

If you’re interested in coming, please RSVP via the Meetup link here. See you at the Star!

(Note: If you can’t make it along, but would like to read The Shadow Booth, we now have paperbacks and ebooks available via our online store. Volume 1 includes stories by Alison Moore, Paul Tremblay, Gary Budden, Malcolm Devlin, Annie Neugebauer, Richard V. Hirst and many more.)

The short story competition was first launched in 2008 and the challenge remains the same: writers are requested to write a piece, in any genre, in no more than 1000 words. The winner of the competition will write four further stories for InterAct Stroke Support over the course of one year and will receive £1000.

The closing date for submissions is Friday 22nd December 2017 and first place will be awarded at the winner’s ceremony in 2018 (date and venue to be confirmed). 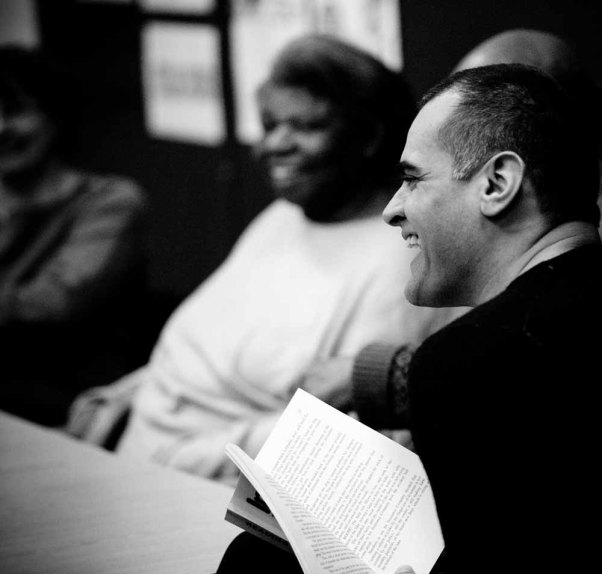 Baroness Ruth Rendell, a beloved patron, judge and friend of InterAct put her name to the award after the first short story competition in 2008 and sadly passed away in 2015. The competition continues to inspire writers in her honour.

InterAct Stroke Support is the only UK charity dedicated to supporting stroke recovery by using professional actors to deliver hospital readings and community projects. InterAct specialises in delivering stimulating and inspiring short stories specially selected to suit the needs of stroke patients.  The readings are designed to assist recovery by improving mood, stimulating the brain and providing a much-needed creative outlet.

Stories of any genre can be submitted by email or post and the submission fee is £15.00 per story. Please find more details and terms and conditions of entry on the InterAct Stroke Support website: www.interactstrokesupport.org/news

Well, this is exciting… After what seems like an age we are returning to The Harrison for Elbow Room Live THIS coming Friday. Our line up celebrates both Volumes 13 and 14, with readings from Richard Skinner, Gram Joel Davis, Owen Vince and Harry Denniston.

We are also thrilled to have the chance to invite Jeremy Tuplin to the Elbow Room stage with his soulful music and intriguing lyrics.

We cannot wait for a night of incredible poetry, prose and live music and truly hope to see you all there. If you can’t make it (and even if you can) we are also having our first ever sale, with everything currently half price. Take a look around our website shop (http://www.elbow-room.org/shop/) and hopefully see you Friday!