The Berko Writers’ Workshop has announced its next course – a six week programme getting to grips with the art of the short story.

It will be led by Adam Marek, author of the collections Instruction Manual For Swallowing and The Stone Thrower. 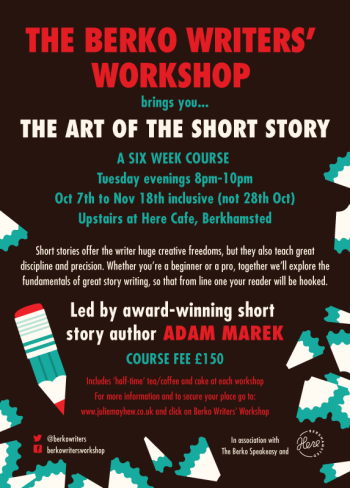 Adam won the 2011 Arts Foundation Short Story Fellowship, and was shortlisted for the inaugural Sunday Times EFG Short Story Award and the Edge Hill Short Story Prize. His stories have appeared on BBC Radio 4 Extra, and in many magazines and anthologies, including Prospect and The Sunday Times Magazine, and The Best British Short Stories 2011 and 2013.

The course runs every Tuesday evening 8pm-10pm from October 7 to November 18 (not October 28 for half-term), upstairs at Here Cafe, Berkhamsted.

Berkhamsted is 35 minutes from Euston and there are four trains an hour, returning late to London.

The course fee is £150 and includes tea and cake at each workshop.