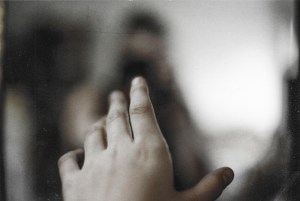 I always wanted to write stories about the Northeast that could be read by people outside of the area, but without losing a sense of the real language spoken there.

Long Story, Short Journal presents the second in our series of interviews: a conversation with Shane Strachan, author of our November 2015 issue ‘Gyurd’. Interview by Laura Perrem.

Laura: Where are you at the moment?

Shane: I’m currently on a train heading up to Moniack Mhor writing centre in the Highlands. I was lucky enough to receive a ‘Made in Aberdeen’ council bursary to go on retreats across this year to get some writing done. In a month like this where I’ve been particularly busy in my two part-time jobs, I am so thankful to be able to run away for a few days and get some peace to write! Moniack Mhor is also a great place to meet other writers and find out what’s going on in the literary scene outside of your area, so I’m looking forward to that aspect too.

LP: What does a typical writing day look like for you?

SS: I try to keep two to three days a week free for writing, but it’s not always that simple to just sit down and write when I actually find myself with a free day: I tend to need some time to dwell on an idea or to remind myself of where I was going with a piece, then if all’s good, it’ll flow out for a few hours. I usually escape my flat to write and often end up doing a tour of cafés and libraries across the city – I find the walks in between can really help when I’ve got stuck. Unfortunately, I’m at my most fired up creatively late at night, and would guess that most of my published work was written around 3 in the morning …

LP: ‘Gyurd’ is one in a collection of short stories which you identify as being ‘related to the decline of fishing communities in the Northeast of Scotland’. What compelled you to choose this site and subject for your collection?

SS: I grew up in the fishing towns of Fraserburgh and Peterhead during a big decline in the fishing industry as both stricter regulations and decommissioning schemes were put in place to conserve certain species. This led to a drastic change in these communities as folk faced up to having to find work elsewhere, to their children not carrying on family traditions, and to the sharp loss of local identity and language. Like many other writers before me who have tackled industrial decline in their work both in Scotland and elsewhere, there was something I felt compelled to express before it was too late, before my own memories and the language of them faded with time. This collection of stories is titled Orra Though It Be, a quote from Lewis Grassic Gibbon’s Sunset Song; it’s a favourite book of mine which deals with many of these themes and very much inspired me to write.

I was also compelled to write the sort of book I myself wanted to read. There are very few works of literature currently being published from the Northeast of Scotland in general, never mind about the fishing communities – the closest and best would be John Aberdein’s Amande’s Bed set in 1950s Aberdeen. So it became very important to me to write these stories, and to ensure they avoided being insular, or old-fashioned, or any of the other misconceptions people may have about writing from this area.

LP: In Gyurd, would you say that Diane is a metaphor for this contemplation on the idea of decline?

(Editor’s note: spoiler alert! Read the story before the rest of the interview.)

SS:  I would say that Diane is an exception to other characters in the collection in relation to decline, as while they all ultimately face up to change, she remains much the same person as she was at the start of the story even though life has thrown a lot at her. I think this is down her need to maintain a perfect Christian life and the denial of anything that could possibly disrupt that: the existence of a half-sister, her father’s infidelity, and, come the end of the story, her own failing marriage. In some ways she could be seen as quite cruel or naive at points, but I hope that readers still sense that she is a kind person who thinks she is doing her best. It’s these sorts of contradictions in character I really love exploring in my stories.

LP: It would be difficult to discuss ‘Gyurd’ without bringing your use of the Doric dialect to the conversation. Can you tell us a little bit about the process of weaving Doric into the language of your storytelling?

SS: I contemplated copying and pasting my entire PhD on this subject for a laugh, but I’m sure you wouldn’t want to put anyone through having to read that!

Doric is the Northeast variety of the Scots language, which, in its rural variants, has been described as being the most distinct dialect from Standard English in the UK. I always wanted to write stories about the Northeast that could be read by people outside of the area, but without losing a sense of the real language spoken there. In able to do both, I blend Doric with a more standardised register; this is a writing style known as skaz, a term coined by Mikhail Bakhtin to describe writing which blends different registers into the one voice. Plenty of writers in different cultures and languages have written in this way, including Grassic Gibbon, James Joyce and James Kelman. Other stories in the collection are a bit more dialectal in the narration than ‘Gyurd’, and many of them also bring in other dialects and languages such as Polish, Mexican Spanish and a Filipino dialect.

Readers will see that I’ve kept the characters’ dialogue quite close to how it’s actually spoken, but even that is written in a way that makes it slightly easier for someone unfamiliar with the dialect to sound out. It’s a big ask of readers, but as Junot Díaz said of his use of Dominican Spanish in his stories, ‘what the unintelligible in a book does is to remind you how our whole lives we’ve always needed someone to help us with reading’, so like reading a book as a child, you passively learn new language from context or you find out the meaning from your wider community.

LP: You also write for the stage. Would you say that your drama has the same concerns as your creative writing practice?

SS: I feel like I’m still really learning when it comes to playwriting and that it’s a very different process from story writing. When I’m working on my own drama, it tends to have similar concerns as my writing and be about the Northeast, but on many wider projects, I’ve been pushed to step outside of these concerns and work a lot more collaboratively. For example, I was commissioned to write a play on maternal health in Zimbabwe for a global research initiative called Immpact, and I’m currently part of a script team for a National Theatre of Scotland production based on the true story of a granite quarryman travelling from the Northeast to Odessa in the 1860s.

LP: What is your next project?

I’m currently working on my first novel. I say “first novel”, but I’m sure it would really be my 4th of 5th if you include a few dodgy attempts before I really found my style through short story writing. Moving from shorter forms to a larger piece has been a bit of a challenge so far, and I can’t say I’m the biggest fan of the novel form in general, so it should prove interesting what I ultimately come up with. At this point, the novel is set in Aberdeen, the wider Northeast and the North Sea, but I’m tempted to take my characters to places much further.

I’m also working on another project for Immpact which will involve running writing workshops with new mothers in Bulawayo, Zimbabwe, in the hope of gathering a collection of stories which reflects different experiences of childbirth in the country. I visited Bulawayo just last month, and had the best time experiencing its fantastic arts scene, linking up with a great publisher called AmaBooks, and meeting the hardworking staff at the local maternity hospitals, so I really have high hopes for this project.

Shane Strachan’s work has appeared in Stand, Gutter, New Writing Scotland, Northwords Now, Causeway/Cabhsair, Freight’s LGBT anthology Out There, and many more publications. He holds a PhD in Creative Writing from the University of Aberdeen after creating a short story collection related to the decline of the fishing industry in the Northeast of Scotland. He has also had theatre worked staged in Aberdeen and has led writing projects in Germany and Zimbabwe. Find out more at shanestrachan.com

Laura Perrem is a Fine Art graduate of the Crawford College of Art and Design. She practices in both visual and written media. Her written practice includes poetry, short stories and art criticism. She has had poetry published in the Belleville Park Pages and is working towards her first collection of poetry.

The November 2015 contributing photographer is Alina Hartwig, a freelance photographer from Germany. Since finishing secondary school two years ago, she has been making her way in the movie business and works additionally as a photographer and artist. View more of her work on Facebook and atFlickr.