As part of Manchester Literature Festival 2014, author David Gaffney has collaborated with “one of the city’s most keenly watched contemporary artists” (Manchester Evening News), Alison Erika Forde. Alison has responded to short-short stories from two of David’s critically acclaimed collections – his first, Sawn-off Tales, and his most recent, More Sawn-off Tales – creating a unique exhibition of paintings, Men Who Like Women Who Smell Of Their Jobs (The Lost Language Of Hairgrips, pictured).

The show runs from 1 October 2014 until 31 January 2015 at The John Rylands Library on Deansgate in Manchester city centre, with a free launch event on Thursday 9 October, 6-8.30pm. This special evening will feature an introduction to the work by Alison, a reading from David, performances by short fiction writers Socrates Adams (“impressive” – Huffington Post) and Anneliese Mackintosh (longlisted for The Guardian’s Not The Booker Prize and nominated for Edinburgh Book Festival’s First Book Award), and specially commissioned music based on the texts and artwork from electronic/ambient two-piece O>L>A (described by music site The Line of Best Fit as “simply beautiful, even breathtaking”). 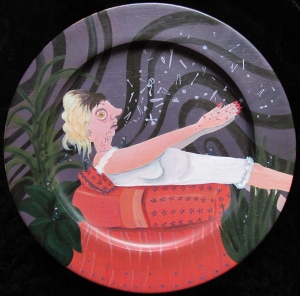